So I’ll finally get to share the rest of last week’s time in Melbourne; as it turns out, wifi hasn’t been readily available for the past few days.

I found out jet lag is real for everyone as it definitely took 4-6 days to get the kids on the right time zone.  They were taking 3-4 hour naps….and even then I had to wake them!  I was also napping 1-2 hours each day.  shh!  But now we’re back on our normal schedule.

We had some really fun adventures last week while Cory was at work.  One day, we took the free tram to the Aquarium.  Bea thought she was big stuff getting to hold on to the pole by herself.  The schools in the state of Victoria (where Melbourne is located) were on holidays last week so we weren’t the only ones with the idea to go to the aquarium.

Bea and Teddy were so amazing though to stand patiently in line for 30 min to get inside.  I was so thankful!  Once we got in through, we had a blast seeing huge stingrays, a gigantic crocodile (I was so glad he was behind the glass), penguins and more.  Another day we went to Federation Square (where there were lots of girls auditioning for Australia’s Next Top Model) and found the “Art Play” area for kids.  Bea enjoyed a few short films until an emcee invited kids onstage.  Bea didn’t give it a second thought and hopped right on stage (with Teddy and me in the audience).  They danced and acted like different animals.  To date, I think this was Bea’s favorite activity in Australia. ha

I’ve also done our laundry once in what they call it a ‘launderette.’  Regardless, I haven’t had to wash laundry outside my own home in probably 11 years…since I was in Australia before. 🙂

On Cory’s last work day, EMC hosted Kids@Work day and it gave the wrong impression to Bea and Teddy as to what Cory actually does at work.  ha  Bea had her nails painted, of course.  They both had their faces painted for the first time.  Bea had Minnie Mouse and Teddy had Batman; they both sat spellbound while the artist painted their faces.  Another first for Bea was trying cotton candy.

On our last night in Melbourne, I decided it would be a good idea to have a snack in the executive lounge before supper to help with Teddy being so hungry when we got to a restaurant.  Oh did this turn out to be a bad idea!  We had to go to our second restaurant option (first option obviously wasn’t interested in children at their establishment) and by the time we got there, he was in a big way!  So much so that he poured the baby food packet we gave him ALL OVER HIS HEAD AND OUTFIT which made him even angrier.  The waitress (who may or may not have been tired of Teddy’s screaming) gave both Bea and Teddy lollipops before we even ordered…if a spoonful of sugar helps, why not a stick covered in it!

Side note, you have to put your key into a slot to turn on the lights in your hotel room…seriously, when you walk in the room, you put your room key in a slot that turns on some sort of master electrical switch making the room come to life.  Very strange, but Cory reminded me this was how hotels in Europe do as well…maybe we are the weird ones.

As it turns out, Friday was a holiday in Victoria for the “Australian Football League Finals” so we decided to head out of town to the Yarra Valley.  Our first stop was a Tulip Festival where there were colors I’ve never seen before…breathtaking!  Then we drove on to our hotel, De’vine Escape, right beside the family owned vineyard, Fergusson Winery.  The kids played on the playground while we drank some wine that we had just tasted in the tasting room and enjoyed some delicious locally crafted cheeses.

Healesville Sanctuary was our next stop where we saw koalas and got to hear a male’s growl/grunting sound.  Like an Aussie told us, they don’t sound as cute as they look!  Bea and Cory got to pet and feed some kangaroos (one in particular named “Krystal” who Bea got to hug)…huge highlight of the trip so far!  We also saw platypus, played with a wombat and saw a baby kangaroo they were nursing back to health…Mommy Bea was super interested in the bottle feeding of a baby kangaroo.

All in all our Melbourne area week was amazing!  We cannot even believe a week is already over but we sure have soaked it in and had a blast!

Thanks again for your prayers.  Next up, the Great Ocean Road! 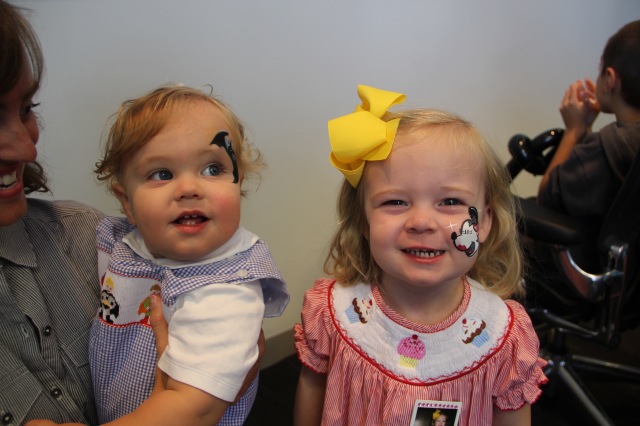 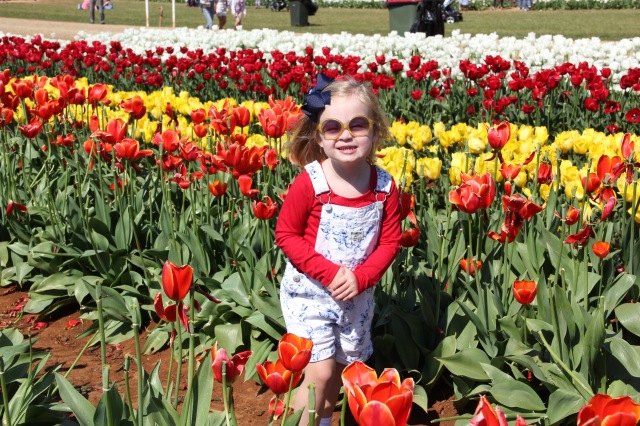 Bea’s dinner in Yarra Valley came with an Australian flag in it! 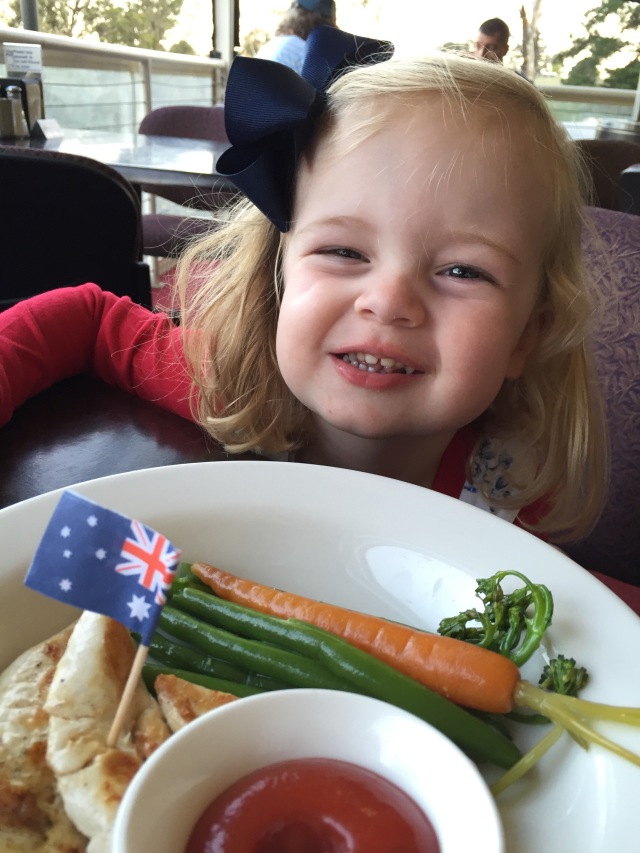 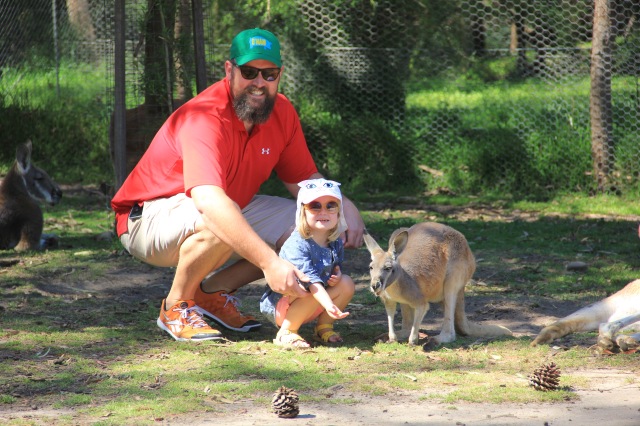