With two great Italian cities down, Venice and Milan, it was time for us to roll on to our next two; Pisa and Rome.

On our way from Milan, we traveled through Tuscany and just had to stop for some wine tastings on our way.  Cory found a few off the beaten path options and we had quite the adventure.  First stop had us crossing a tiny brick bridge then we drove up a gravel hill to Greo Winery; we found a lady in her night gown who ended up being the proprietor.  I didn’t see that coming!  She met us at the top of the hill to let us taste her wine.  She spoke no English but she definitely could make wine!  On our way to another winery, I read that we should’ve scheduled tastings in advance.  Oops!  The owner of Valle del Sole Winery was also ready to call it a day but was kind enough to offer a great tour and tasting of his family’s wine and olive oil.  When you own it, you stay longer!

We made it to Pisa and Cory and I had an unexpected date night.  It’s nice to discuss the past few weeks of travel and talk about getting back to normal life in less than a week.

Cory worked at the University of Pisa the next day while we hit the sights.  I drove the big, diesel van down the narrow streets and even managed to parallel park (with help).  Again, I found a cute cafe for breakfast…that was closed at 10am!  What time do they eat breakfast?!  We found somewhere else to get pastries and coffee.  It was down a cute pedestrian street with a market at the end….of course, we bought some items.  Onto the Leaning Tower where we had to get pictures holding up the tower.  Bea proceeded to do this in all pictures the rest of the day!  The Baptistery had a beautifully carved pulpit and the best acoustics when an employee demonstrated it.  Pisa Duomo was just stunning as most all European cathedrals have been.  There were also so many people selling their wares there (and all throughout Italy); they don’t take no for an answer very easily!

Fun side note of Pisa is that the author, Tony Wolf, of Pinocchio is from there.

We had a late lunch so we stopped at a grocery for fruit, cheese, crackers and jelly for a picnic supper in the hotel lobby.  It was a nice change of pace.

On Friday, I drove us into Lucca, the town next to Pisa, and had a spread of pastries, cheese and olives at Cafe Monica for breakfast; I love a “grazing” meal! Lucca is an adorable little town with quaint shops.  We found the cutest book shop (Italian of course) to peruse and a Gelatarium that had swings to swing in while we ate.  When Cory was done working, we picked him up, packed up our luggage and drove on to our final destination of this trip…Rome!

Marriott for the win in Rome!  We had a big suite where Bea could have her own room and Teddy’s tent fit easily in the closet.  Bea cried the first night as she wanted her brother to sleep in the same room with her.  Wonder if their separate bedrooms at home will be sad or a nice welcome.

We only have two days in Rome so we waked early to see as much as possible.  We were told to buy tickets online for the Vatican Museum (which was necessary unless you want to wait in the longest line) and it was great advice!  I have never seen so many sculptures in all my life!  The detail of these figures, paintings and tapestries were exquisite!  Sistine Chapel was the last thing we saw which was a perfect crescendo to the museum!  The artistry of Michaelangelo was astonishing!  We also pre-bought tickets for St. Peter’s Basilica.  When you do this, you are given a designated meeting point to pick up your tickets then they parade you in passing the line.  It’s a brilliant concept!  The history of this church (and all we saw in Europe) was just amazing!  After a much needed lunch, we got on the hop on hop off bus to see the Colosseum.  Wow; this ancient sporting venue is massive, beautiful and wild to think they built it in 75 AD and hosted games for 500 years there!  Times sure were different then! No day in Italy is complete without some gelato and today I tried Nutella; yum!!!

On our last day of sightseeing we decided to take it a bit easier.  We found some markets to leisurely shop and enjoy.  At the first one, we let the kids have a few dollars to spend and they picked out a couple of toys.  We told Bea she only had enough money for the doll so she put the bracelet back that she had wanted also.  Then the shop owner gave her the bracelet too.  What a fun lesson in picking and choosing as well as kindness.  The second was Campo de Fiori which has been around for 400 years.  We bought fruit, saw lots of dried pasta and tried the water pump…called the Nasoni, which means big nose because the fountains look like a big crooked nose.  If you put your finger over the spout, the tiny hole in the top shoots water out to you like a drinking fountain.  Brilliant and there is more than 300 around Rome!

On to sightseeing…the Pantheon; it’s the oldest (built in 27 BC) ancient ruin that’s still in tact.  The only light in is a hole in the ceiling!  It is a must see! My third favorite restaurant in Italy was next up at Papa’s Cafe.  It was down a cute cobblestone side street. We did a lot of walking today including to the Spanish Steps.  They’re very picturesque! However we walked up to the top of them and then walked down.  We were fine but my sweet husband had to carry the stroller down.  Kids!  More walking to the Trevi Fountain to let Bea (Teddy was asleep) toss a coin over her shoulder.  Last stop was for gelato.  The amount they give you mixed with the heat makes for sticky fingers as it drops down from your cone or cup.  We waked Teddy (as promised) so he would not miss out on his last gelato opportunity.  Back at the hotel, my momma and aunt watched the kids as they played on our giant patio and we packed while we waited on our room service to cater our last dinner in Italy on our brilliant patio.  It was a great ending to an unbelievable trip!

It’s hard to believe we’ve been gone for six weeks!  It’s always bittersweet to go home. Until our next time “going with Daddy!” 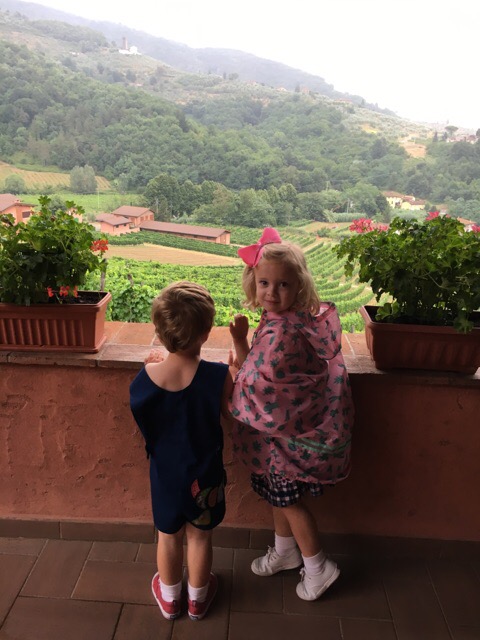 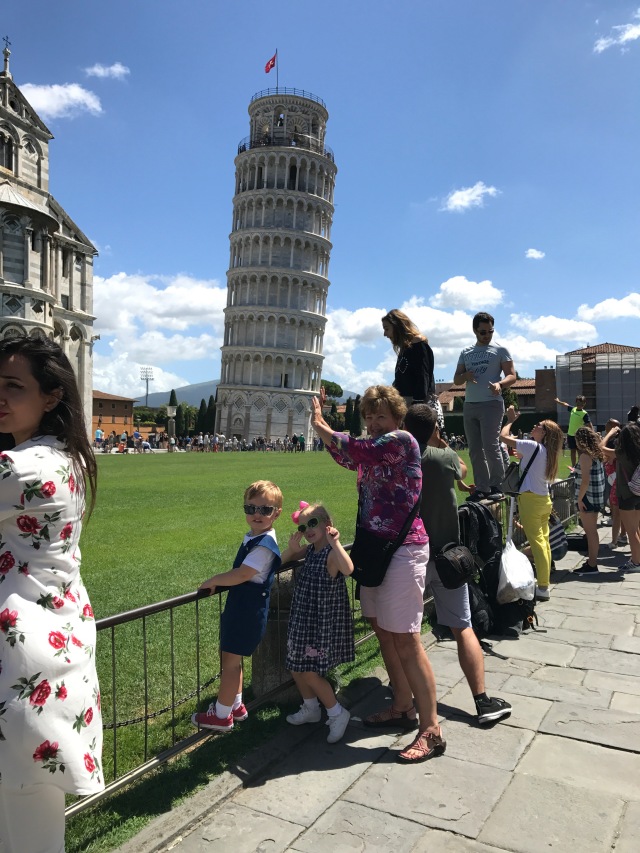 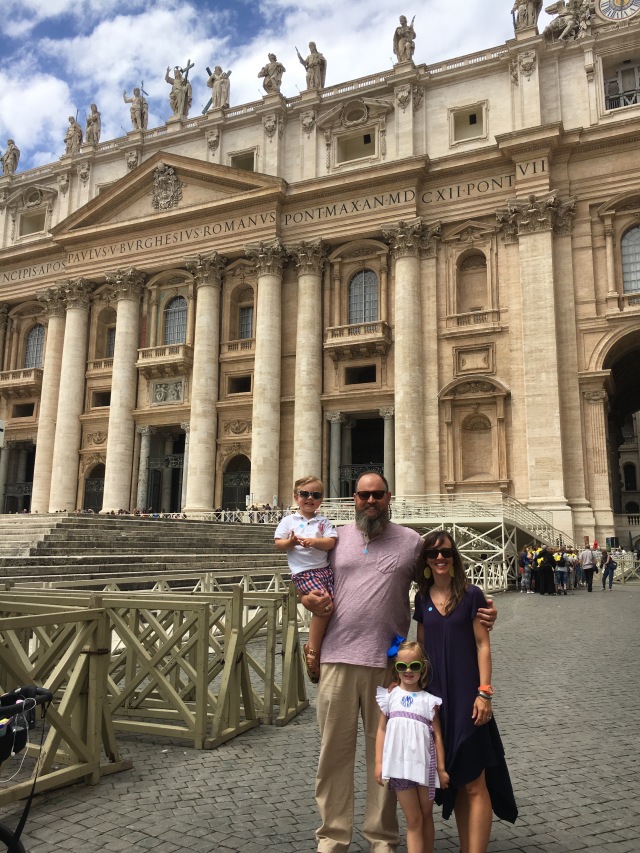