On Friday night (May 26), we made it to Paris and Ubered to the super fancy Hilton Paris Opera.  When we arrived, the trouble started. Cory booked the room through his corporate travel site (and chose the “family fun” rate), but the receptionist told us we’d have to book two rooms to accommodate the four of us.  Cory said cancel our room but she said we’d still be charged…Cory would have none of that, so we demanded the manager.  Oh mercy!  The manager agreed to cancel the room free of charge and we began collecting our stuff to head to the nearest Marriott, but as we were leaving, the manager told us he could accommodate us in one room.  Ok then!  He also gave our kiddos stuffed koalas.  He really turned a bad experience to good with wonderful service!  Bea had a roll away bed and there was room on the floor for Teddy’s tent….perfect!  He sleeps in a Kidco Peapod Plus for consistency on our travels.  We had a late supper at a nearby cafe before much needed baths and 11pm bedtime!  When in Paris!

We have a long weekend without Cory working (since it’s Memorial Day in the states and a bank holiday in France) so we’re pumped to have him walk around the city with us.  We found the Rallye of Princesses; a bunch of old foreign cars with two ladies driving 1800km to the south of France as we walked toward the Jardin De Tuileries.  There we found a playground and a carousel!  It was a gorgeous but hot so we drank a lot of water.  Lunch at Cafe Saint Germaine for some rose wine, cheese, charcuterie and ice cream.  What more can you ask for!  We’re still catching up on jet lag and have ulterior motives for the evening so we all took a three hour nap!  We went to Gusto Italia for amazing spinach and ricotta cheese ravioli and pizzas!  Then the reason for our late evening was to see the Eiffel Tower light up at sunset.  And you have to enjoy a Nutella crepe from a park cafe while you wait, right?!  As Bea said, it “sparkles!”  It was a beautiful sight as this is my third time to Paris but I’d never seen it in lights…eyes were a bit damp with the wonder of it all.  It was so worth another late bedtime!

We had a surprise for the kids on Sunday… Disneyland Paris!  We had to switch hotels first but after doing that we headed on the hour train (city and suburb ones) ride east.  Disney Paris isn’t near as big as Disney World which was nice since we didn’t get there til 11am.  Since we had just been to Orlando, we could just enjoy rides and leisurely walk around instead of hustling from place to place.  Here the Fast pass systems works the old school way…i.e. one at a time that you get at the ride.  We chose our one FP for Peter Pan’s Ride which ended up being our next to last ride of the day.  Of course we had to ride It’s a Small World.  We went on only one faster ride Casey Jones railroad to which Teddy kept saying “this is so fun!”  Bea showed Teddy all about the Swiss Family Robinson treehouse.  Bea said her favorite part of the day was the Peter pan ride and when Wendy (the character) “flew by” us.  Every ride/experience we went on Teddy found the animals and said that was his favorite part!  It was a super fun but super hot and sticky day.  The weather has continued to be beautiful but way warmer than we anticipated!  Side note, we left our passports in our room’s safe at the Hilton earlier that morning.  However the Hilton had them brought to our new hotel for us!  They went above and beyond after the initial issue.  We are so used to a Marriott though as it felt like home when we got settled especially since Cory has status.  We got a junior suite which means two rooms…bonus!

Before Cory went back to work, I decided to do some laundry.  While I did laundry, Cory took the kids to Jardin de Luxembourg to play.  He found an adorable playground (that you had to pay to use).  Then I met them at Huitrerie Regis for an oysters, prawns, salami and rose wine lunch outside.  Tonight, we met up with family who are also traveling right now.  My cousin Jeffrey and his wife a Rachel went on a 444 around the world trip in 2005-06 and now they’re sharing the fun with their two boys, Miles and Graham.  We also met up with Rachel’s brother, Ted, his wife Lila and their oldest daughter Grace Ann.  Our meeting place was Roland Garros, the French Open.  We went to the US Open in 2009 so we’re two for four on grand slams now!  The kids were so excited to see their cousins and have some close in age buddies!  It was so fun to be there and cheer on our Americans.

Cory headed back to work on Tuesday so the kids and I joined our family for the day.  We took the train but it is harder to navigate than London.  In Europe everyone uses a pin with their credit card but our (American) credit cards doesn’t support one. It adds extra challenge to things which the French certainly don’t appreciate.  I figured it out and met up with everyone but not before the kids were offered a Chupa Chupa (lollipop) by a sweet old man.  People love candy here and even more so to give it to children.  Bea and Teddy surely don’t mind!  Thank goodness for extra help as we made our way to the Palace of Versailles.  It was magnificent to see the vast creativity of multiple kings!  The lush green grounds were also beautiful!  Bea really enjoyed the audio guide!  Mostly it was just so fun to be with everyone especially for Bea and Teddy to run around with their cousins.  Cory met us for supper as we soaked up family time before we all parted ways the next day.

Travel days take more time than you would expect.  So Wednesday morning, we let the kids play in the room while we packed up.  I had to gather all our clean laundry that has been hung all over our two room suite.  On to the airport where our flight was delayed.  Then we had a small clothing issue where we had to clean it in the bathroom sink.  Thank goodness for Dyson dryers!  Then another minor crisis appeared…As it turns out, Cory (6’5″) literally couldn’t sit with his knees in front of him on the Alitalia plane seat…knees to tailbone exceed the seat depth by a good 3 inches.  Thankfully, they were able to let him move to an exit row, but not before a number of passengers had a good laugh at the giant guy trying to wedge into a seat…tall really is the demographic no one cares about!  I, on the other hand, will never have that problem! 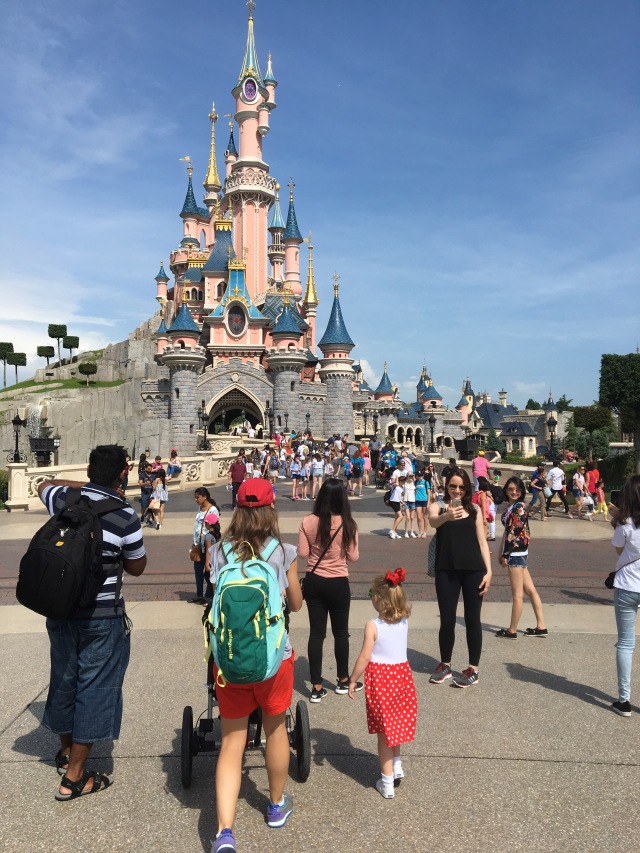 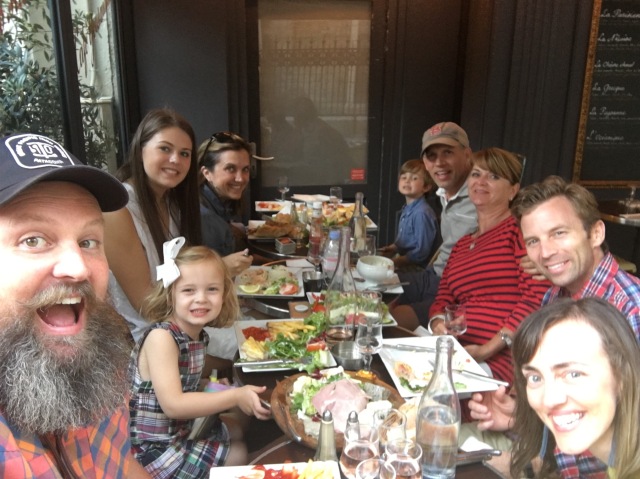